We love hearing from our alumni, and love to know that you’re in touch with one another. Check out recent news from some of our alumni – staff, campers, and camp parents.

Erika Zachman (camper 2011-2016, staff 2018-2021) and Jack Maud (staff 2016-2021) were married in Grand Lake, Colorado on September 5th. Zachman, a third-generation camper, spent her camper years at Girls’ Trail’s End, before returning on staff as a Chipeta wrangler, sports counselor, and Assistant Director. Maud learned about Cheley at a Camp Leaders summer camp fair in London. He worked as a sports counselor and Assistant Director in Lower Ski Hi, then spent a summer as our Boys’ Camp Director.

Rachel Harvey (staff 2017-2018) and Jared Sullivan (staff 2015-2017) exchanged vows on October 1st at Woods Kitchen in Estes Park, Colorado. Harvey spent her first summer as a photographer before working at Girls’ Trail’s End as an outcamping counselor. Sullivan worked two summers as a videographer with his final summer being on CheDOT.

James “JJ” Perkins (camper 2010-2012) married Hannah Story on October 15th in Fort Worth, Texas. Perkins was a camper in Haiyaha for all of his summers.

Rebecca Stubbs (camper 2003-2006) married Andrew Blackstock on October 17th at the Frank H. Cheley Chapel in Estes Park, Colorado. Stubbs was a camper in Chipeta and Senior Chipeta. Her mom, Carrington Gregory, was a staff member in 1975.

Arianna “Ari” Pattek (camper 2001-2008, staff 2016-2017) married Brendan Plesha on October 23rd in Chittenden, Vermont. Pattek was a camper in Lower Chipeta, Chipeta, and Senior Chipeta. She returned to staff as a wrangler in Senior Chipeta for two summers. During her time at Cheley, Pattek gained a love for horseback riding – so much so that she exited her wedding ceremony on horseback!

Mary-Katherine Peet (camper 2008-2013) (left) and Trevor Peebles got engaged on September 3rd, 2022. Peebles proposed on the porch of Totem Teepee in Estes Park, Colorado at Peet’s favorite place with her favorite people. 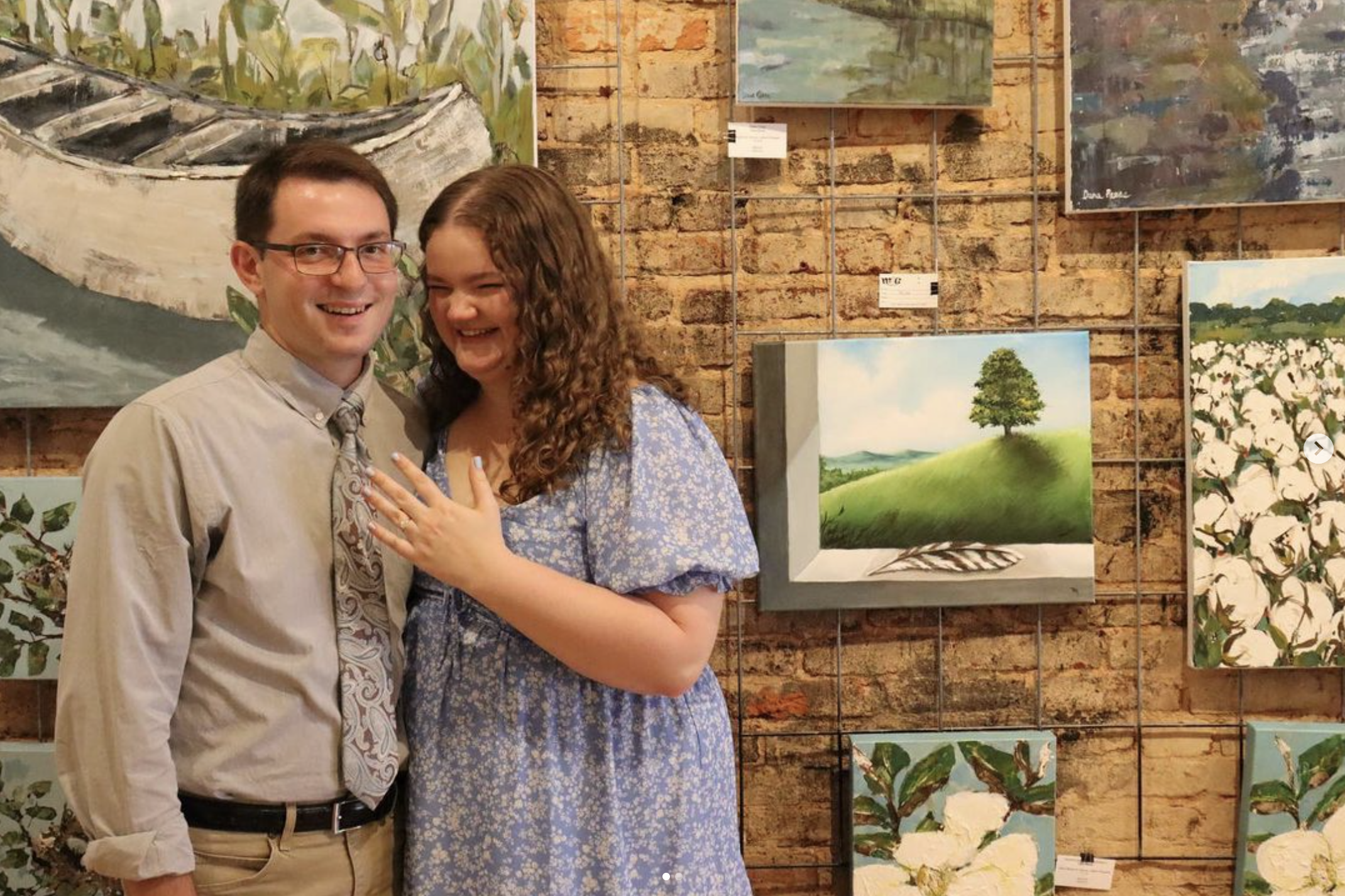 Nicole Wilson, Ranch Manager at Cheley, and her husband Ryan Wilson, Facilities & Maintenance at Cheley, welcomed Reid William Wilson (below) on September 21st. Born seven weeks before his due date, he weighed 4lbs 1oz (7 3/4” tall) and is now over 7lbs – he is determined to do things on his own agenda. Nicole and Ryan are enjoying the transition to parenthood, “it’s so fun having him home!” 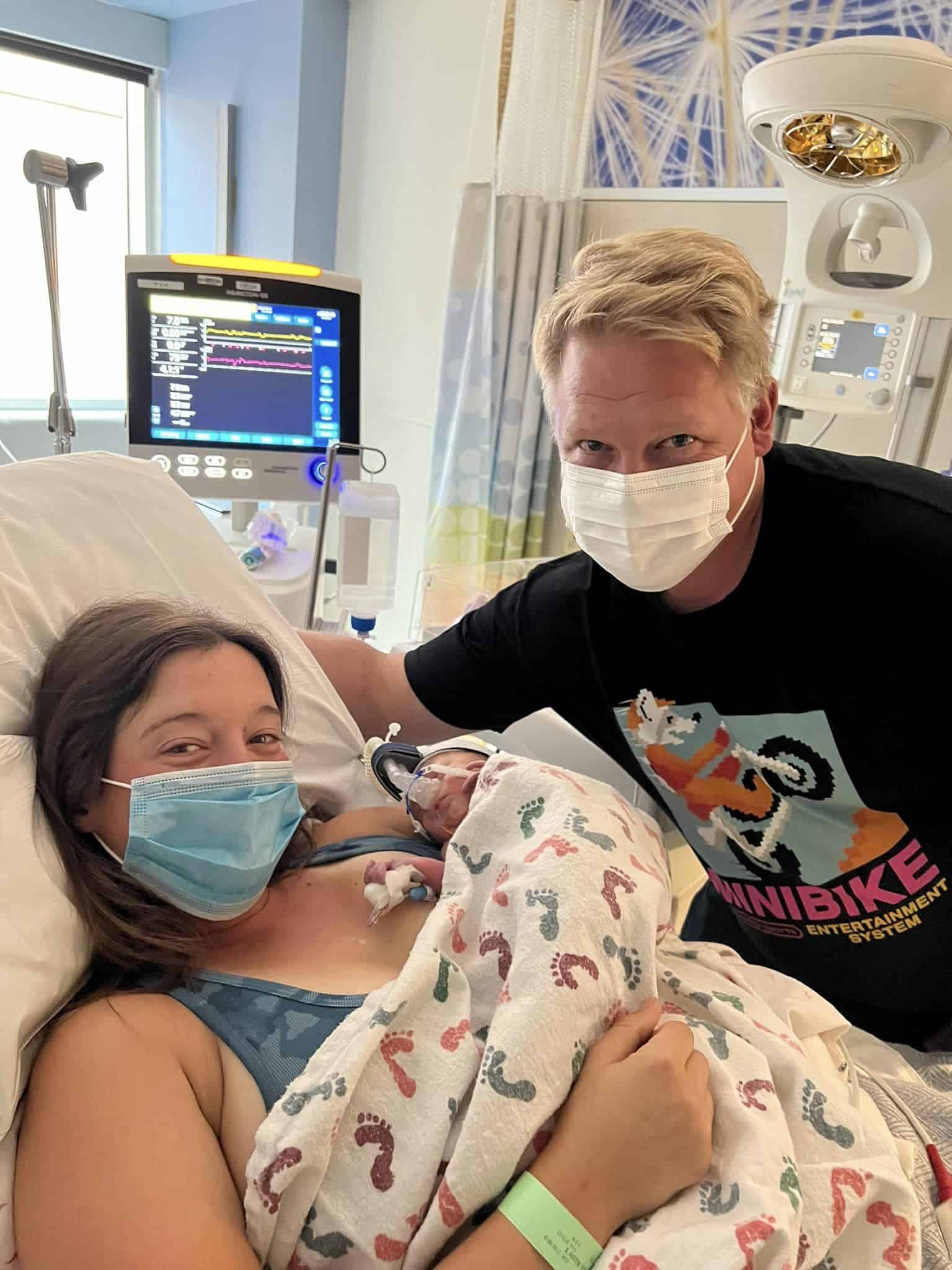 Kelsey Hickok, neé Knapp, (camper 1974-1983) passed away unexpectedly in June 2021. Her parents, Dorothy and Scott Knapp, were on staff in the 70s and are truly grateful for the joy and adventures that Cheley gave to Kelsey.

Rowan Chiara Meredith (camper 2000-2008, staff 2019-2021) passed away unexpectedly on December 31st, 2021. For Rowan, Cheley had always been like a second home. The friendships she made became family to her – She will always be remembered for her energy, her enthusiasm, and her spirit. For those who knew her in Lower Chipeta, she was incredibly shy and soft-spoken her first summer. As she grew more confident in herself, she opened up more and more to friends that surrounded her, and she positively influenced everyone she came in contact with. Her shining light will live on forever through the memories we’ve shared with her.

Barbara Ann “Barb” Podschun, neé Hungerford, (staff 1986-2012), 85, passed away on May 13th, 2022. Working 23 summers at Cheley, Barb was the Head Cook in Chipeta and at Girls’ Trail’s End. Over the course of her career, she fed over 10,000 children. She loved bringing her grandchildren to camp – that connection became a vital one for her family. She loved hiking in the mountains, watching all kinds of sports, crafting, volunteering, and traveling. She visited all 50 states, all but one Major League baseball stadium, and many national parks. She was a beloved mother, grandmother, sister, friend, cousin, and aunt, and will be dearly missed.

Laura Kowalski, neé Hayden (camper 1970-1975, camp parent 1998-2009), 64, passed away on May 19th. Laura was a 21-year stage 4 cancer survivor and following her cancer diagnosis continued to live with many challenges and health issues. Even with all the adversity, she always remained positive, had a smile, and wanted to help others. Laura was a second-generation Cheley camper who then became a Cheley parent to her children Lindsay “Kwal” Kowalski Phelan, Hayden Kowalski, and Reed Kowalski. Laura is survived by her three children and husband, Bill.

Robert “Bob” Herrick Bell (camper 1940s), 90, passed away peacefully at his home on May 28th, 2022. Cheley was a formative experience for Bob, his children, and his grandchildren. He will be remembered as a dedicated, devoted, and loving husband, father, grandfather, great-grandfather, uncle, friend, fraternity brother, and work colleague. His good humor; keen curiosity; love of the arts, nature, and wordsmithing; and optimistic outlook on life were felt by all who knew him. He will be greatly missed by those whose lives he touched.

Ann Elizabeth Hutchins, neé Dickerman (camper late 1940s/early 1950s), 87, passed away peacefully in her sleep on October 24th, 2022. She was a beloved mom and grandmother as well as an influential teacher, superb photographer, and Master Gardener, among many other talents. She spent three life-changing summers in the mountains at Cheley as a young teenager. She is now surely singing with the angels as she planned.

Cora “Coke” Petrocin, neé Altick, 99.5, passed away on November 23rd, 2022, in Estes Park, Colorado. Coke, or Cokie as she was called, was the grand old age of 99 and a half, and always told anyone who would listen how grateful she was to have lived such a long and wonderful life in such a beautiful place. She wanted all her friends and family to know that she loved them and that she believed she would see them again. In 1926 at the age of three, Coke spent the summer living with her parents at the Bear Lake Trail School, which was started by Frank H. Cheley, who later founded Cheley Colorado Camps. Coke’s parents eventually worked for Cheley and Coke was a backpacking counselor in the summers at Girls’ Trail’s End, outside Glen Haven, until the end of WWII. Coke’s house was always filled with family, friends passing through, and old Cheley friends. All were graciously welcomed and fed generously! She will be greatly missed.

Betty Jean Ehmen, neé Hersey (staff), 95, passed away on December 6th, 2022. Following her retirement, she cooked one summer at Cheley.

Carol Johnson (staff 1987-1994), 70, passed away earlier this year. She was a photographer at Cheley for many summers.

Sally Weisser, neé Campbell (camper 1958-1966, staff 1968-1969), 73, passed away peacefully on December 18th, 2022, in her family’s home, after a ten-month battle with stage IV lung cancer. She developed a deep passion for hiking and backpacking while attending camp during many of her childhood summers. Her strength and wisdom will be remembered and dearly missed by all who had the honor of knowing her.

Richard “Whitey” Paddock (camper 1986-1989) visited Estes Park this year for the first time since he left Boys’ Trail’s End many years ago. “So many great memories,” shared Richard.

Liz Montoya, neé Deschner (camper 1988-1994, camp parent 2017-2022) has been back in Bozeman, MT since 2005 lawyering and raising two kids. She opened a criminal defense law firm in 2011 and it’s still going strong today! Ruby Montoya (camper 2017-present), 15, is counting the days until she returns to her friends and the life she loves at Girls’ Trail’s End in 2023. Jack Montoya (camper 2017-2019), 17, is enjoying his senior year of high school and wrestling at the varsity level. All is well and their individual and collective Cheley experiences work their way into their lives each and every day!

Carol Hallock, neé Saunders (camper 1987-1995, staff 1999) and her husband, James, of Colorado Springs, Colorado have four kids – Abi, 11; Elise, 10; Maggie, 5; Caed, 3 – who are all enjoying school and keeping busy. Carol commented that she “loves seeing the Cheley updates on Facebook!”

Maylia Murphey (staff 2021) is fulfilling a massive dream in 2023 and hiking the Pacific Crest Trail!